Blog Tour: Saying I Do by Tracey Alvarez

This is my stop during the book blitz for Saying I Do by Tracey Alvarez. This book blitz is organized by Lola's Blog Tours. The book blitz runs from 19 till 25 May. See the tour schedule here. 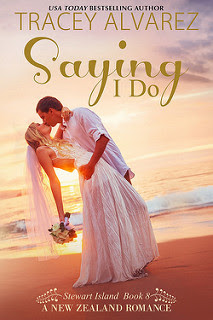 Marriage and happily-ever-after are for suckers…

Joe Whelan was fooled once on the way to the altar, and the Irish doctor isn’t about to be an eejit over a woman again. Especially not one who witnessed his broken-hearted humiliation years ago. He won’t be swayed by the sparks that fly whenever his eyes meet MacKenna’s or distracted by her sweet kisses. The only thing Joe cares about is preventing his sister from making the biggest marital mistake of her life.

MacKenna Jones loves a good wedding—so long as she’s sewing the bride’s gown, not walking down the aisle herself. Falling for Joe Whelan’s sexy bedside manner wasn’t on the cards, neither was a seven-day road trip with him to Las Vegas, the Marriage Capital of the World. When the stakes are so high, will these two gun-shy cynics ever say I Do?

You can find Saying I Do on Goodreads

Listen to the soundtrack for Saying on I Do on Youtube 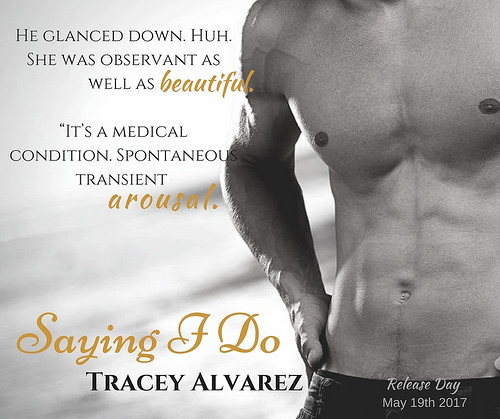 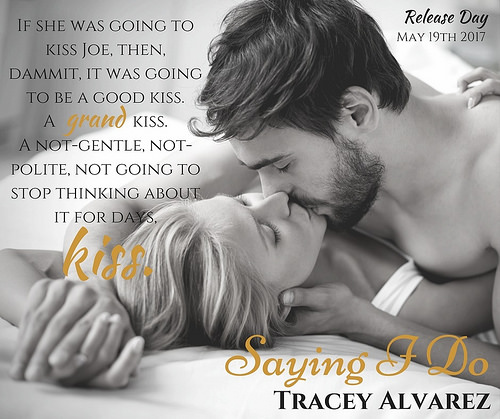 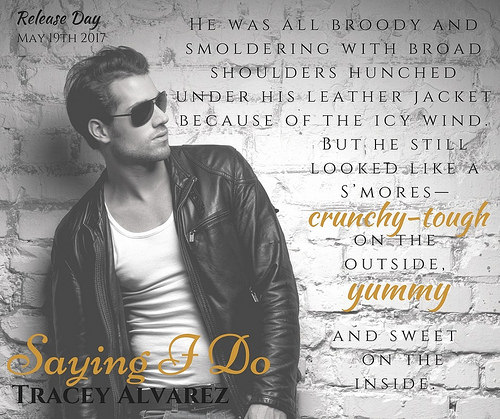 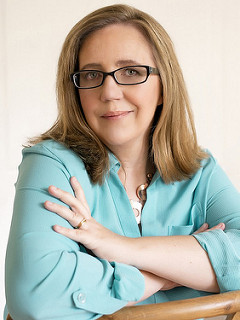 Tracey Alvarez is a USA Today Bestselling Author living in the Coolest Little Capital in the World (a.k.a Wellington, New Zealand). Married to a wonderfully supportive IT guy, she has two teens who would love to be surgically linked to their electronic devices.

Fuelled by copious amounts of coffee, she’s the author of contemporary romantic fiction set predominantly in New Zealand. Small-towns, close communities, and families are a big part of the heart-warming stories she writes. Oh, and hot, down-to-earth heroes—Kiwi men, in other words.

easily hold a wedding party of six. As much as she wanted to soak in a tub filled with

bubbles, if she wasn’t to be a complete wreck meeting Joe’s family later, she needed to crawl

beneath those sheets and sleep for at least an hour.

“Shower and sleep,” she said. “I’m on an unstoppable trajectory to get clean and

He grinned that sexy, promising a good time grin, and she nearly caved. Before Mac

changed her mind, she ducked into the bathroom and shut the door. Locked it. Keeping

temptation out of reach—for her, not him. Tapping her phone, she selected her favorite

playlist and cranked up the volume. Nothing like Freddy Mercury’s soaring vocal plea for

someone to love to set the mood for a refreshing, loooong shower.

Once her fingers started to prune, she relented and got out, pouncing on the free bottle

of expensive body lotion. While Cyndi told the world about girls just wanting to have fun,

Mac finished slathering on the lotion. She’d been a little premature turning down the

opportunity to mess up the sheets with Joe because parts of her were very refreshed.

She flung open the bathroom door, shimmying everything she had, the chorus on her

One sat on the sofa, the other reclined on their bed, beer balanced on his flat stomach.

by the two strangers. Joe turned a murderous stare at the two men—who were obviously his

brothers, judging by their same coloring and bright blue eyes.

Mac froze momentarily, like a possum in a hunter’s spotlight, a flight or fight

response kicking in, even though in this case, embarrassment would kill her before the

adrenaline overdose. She bit down on the urge to shriek like a train whistle and slapped an

attitude-infused hand on her waist instead. What was the point of rushing away when men

had a photographic memory for boobs and bums? They’d be retelling this story for years.

“You must be Joe’s brothers,” she said. “Nice to meetcha.” As if she met her

boyfriend’s family bare-assed every day of the week.

“Pleasure is all ours,” said the brother from the bed, lifting his beer in a silent toast.

“Luke,” the older of the two men said, from the sofa. “We brought beer.”

Both men, after their initial surprise, met her gaze squarely without their gazes

lowering to her…assets. Now if she could just figure out how to make a graceful exit…

crossing the room in double time to wrap it around her, using the bulk of his body to block

“Flippin’ hell, Mac,” he muttered, tucking the tail of fabric between her breasts.

His voice was gruff, but not with the chastisement she’d assumed. His face told her he

was caught between laughter, annoyance, and possessive arousal. Suddenly, she wanted the

There is a tour wide giveaway for the book blitz of Saying I Do. This giveaway ends May 25th. 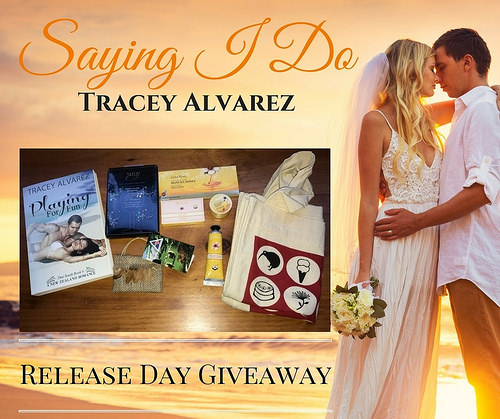 Giveaway rules
* Prizes are not exchangeable for cash or anything else.
* All due care will be made in ensuring the prize arrives at the winner’s address, but the author is unable to refund prize value in any way should it not arrive due to postal disaster.
* Entries close on May 25th and winner will receive a direct e-mail from me shortly after – so please ensure Tracy Alvarez’s e-mail address is added to your safe/contacts list. If the author doesn’t receive a reply from the winner in 48 hours, a new winner will be drawn.

For a chance to win, enter the rafflecopter below.

To qualify for the bonus 5 entries, you'll need to purchase Saying I Do and answer this question in the space provided in the rafflecopter. The question is: What is the last 4-word sentence at the end of Chapter 13?

Get it Free on Instafreebie 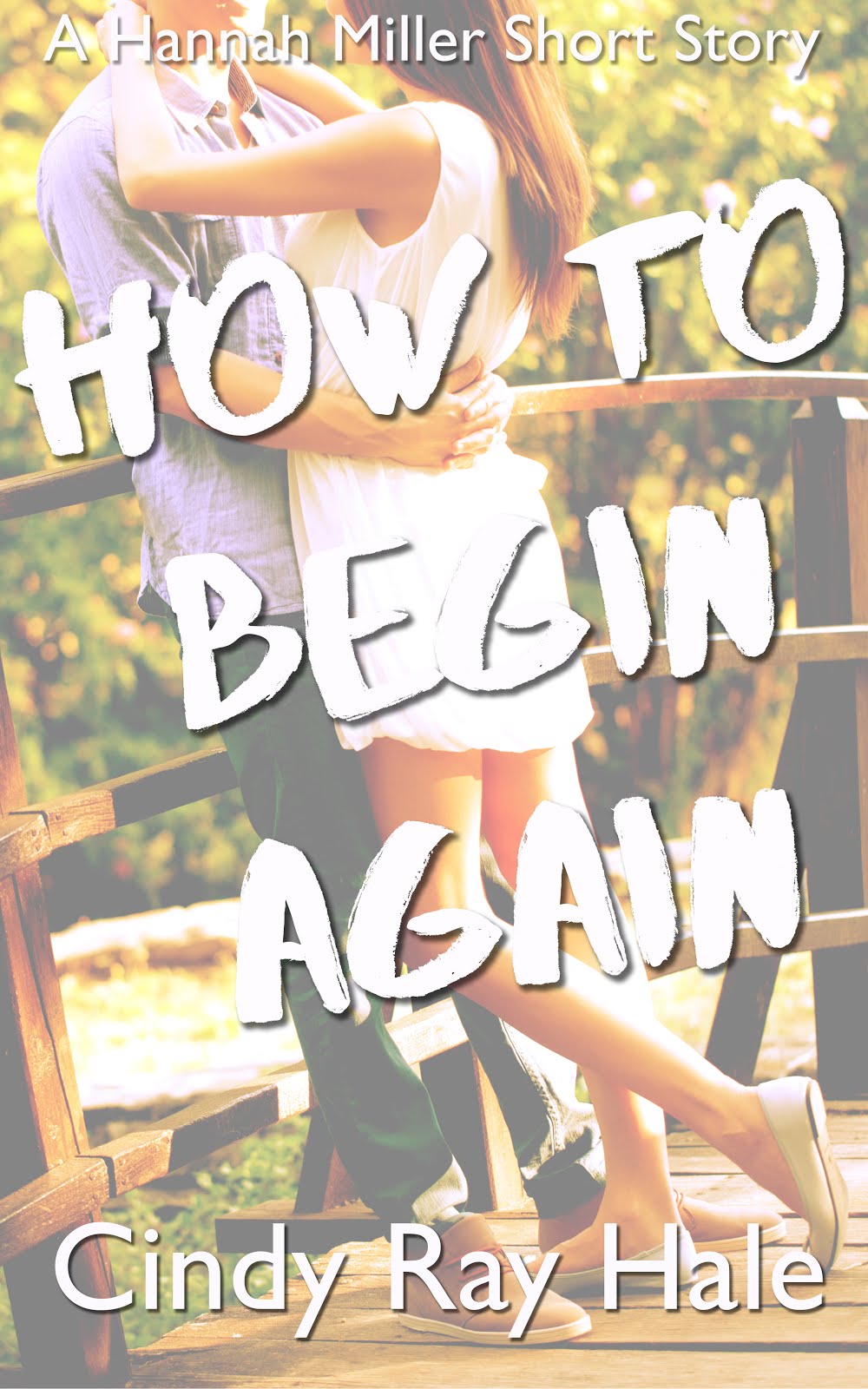 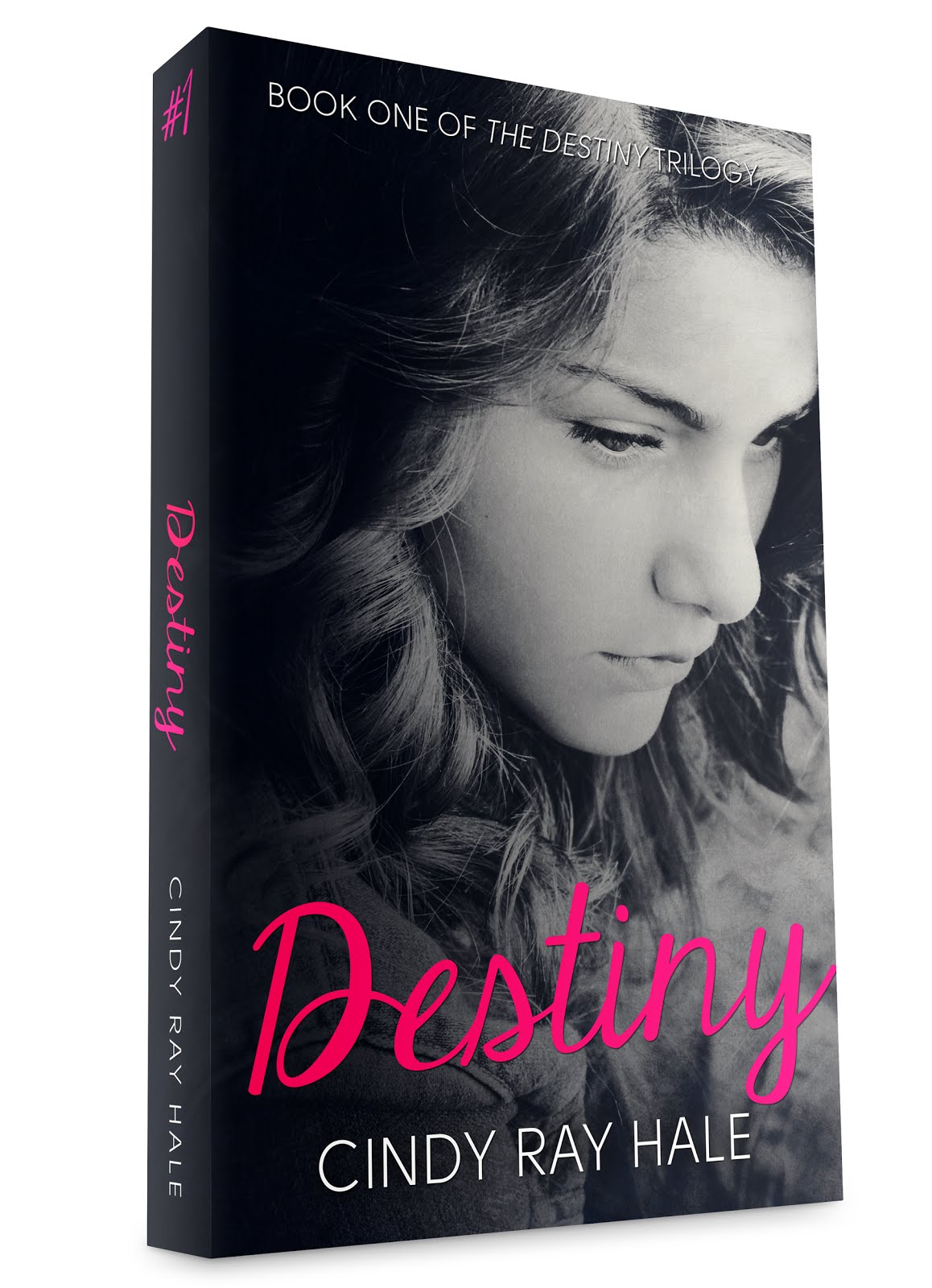